Sorry for the delay. I know I said I’d post at least one a week, but the last couple have been hectic… vacation/destination wedding, and a family emergency that called for me being AFK. Here’s one I had in the tank waiting for the pics for a couple of weeks. No more delays, another review coming soon! 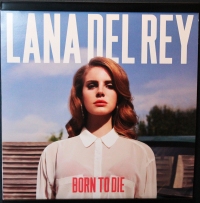 Yes, I’m going there. A pop princess on a major label. Not exactly my wheelhouse, I know. But this album is incredible, and given the amount of time I’m pouring into it, I think it’s high time we discuss it. I repeat, INCREDIBLE.

The album opens with the title track, a soft, soulful, hip hop tinged piece of indie pop that’s smooth like butter. The whole album can be described like this, I suppose: pure smooth perfection. The first four tracks comprise the strongest opening set of any album this year, for that matter, of the last year, maybe the last 10 years… the opening tracks of Black Sheep Boy or You Are The Conductor hit just as hard, but we’re talking apples and oranges to a certain extent. Del Rey’s lyrics are clever and dripping with sexuality, and their cleverness makes them listenable in a way that pop music about sex usually isn’t for me: I hate the blatant sexuality in modern pop, and Lana, at least, doesn’t smack us over the head with it (ie. from National Anthem: “I sing the national anthem, while I’m standing over your body, hold you like a python; and you can’t keep your hands off me or your pants on…” Rowr. She’s sexy without just saying “I want to have sex with you” (which, I suppose, isn’t all that sexy and explains why I’m not a fan of that sentiment in pop). 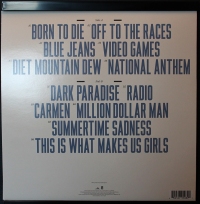 Song after song, Del Rey blows us away with clever lines, thoughtful melodies, and her silky voice. The comparison to Nancy Sinatra is a fair one, but she channels a wide spectrum from the pop world, from bits and pieces of Gwen Stephani to a tiny taste of Betty Boop (in the chorus of Off To The Races: “I’m your little scarlet, starlet, singing in the garden, kiss me on my open mouth”). She doesn’t display much versatility to any great extent on this album, but that can hardly be described as a criticism: if it ain’t broke, etc. Not a real complaint. My only real complaint is that the album seems to drag a little by the last couple of tracks… not sure if mixing things up a bit would have helped, but I doubt it, because This Is What Makes Us Girls, the closer, is a very strong track. It certainly drags more in the deluxe format though: the three additional album tracks I have heard (non-vinyl tracks, iTunes deluxe edition IIRC) really don’t add to the album and are a struggle to get through by the time the standard edition tracks are done.

The album cover is a further reflection of the aforementioned muted sexuality: classic Hollywood beauty with a hint of the red bra through the barely transparent white shirt (something I honestly didn’t notice until I held the vinyl in my hand). I’m not sure Del Rey’s music could be better described by a single image. The album art looks amazing in the vinyl format as well, bright blues and pastels with a blurry American car in the background: like I said before, classic Hollywood. The insert is nice, another beautiful pic of Del Rey with the lyrics printed on the opposite, but I prefer gatefold! Pretty minor gripe I suppose.

I’m not going to link to any purchase links, because I want to warn that this is on a major label, and I make it a practice to avoid supporting those monsters. Hypocritical, I know, since I bought the album, but I had to have it. Better to support your favorite major label bands by seeing them live, buying merch, etc. If you can see past that, though, this album is a MUST BUY and I can’t recommend it highly enough! 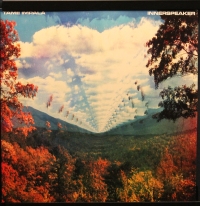 Tame Impala are a four piece psychedelic/indie rock band out of Perth, Australia. I say band, but in reality, at least up until Innerspeaker, Tame Impala was essentially a project of Kevin Parker, a multi-instrumentalist and the writer/performer for the band when in studio. Tame Impala are better described as part of a collective: Dominic Simper, Jay Watson, and Nick Allbrook are friends of Parker’s, and fulfill the role of live touring band for Tame Impala. Furthering the collective atmosphere, Parker actually plays touring drums in Pond, a project put together by Watson and Allbrook.

I’ve always had a soft spot for psychedelic rock. With that in mind, Innerspeaker is an album that I’ve had on a list of “must buy” albums since 2010. One of the best albums of that year, in my humble opinion, Tame Impala’s debut was produced and is pressed in Australia, and it seemed like every vendor I tried to acquire this album from was out of stock and had no idea when the backordered album would arrive if an order was placed (I guess it’s a bit of a challenge to get represses from halfway around the globe). At any rate, I finally bit the bullet and placed the order through Insound in January, and it was shipped from their facilities a month later. Not too bad. 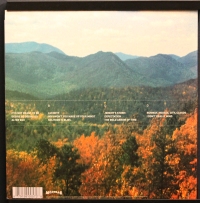 Innerspeaker opens with a blast of fuzz, out of which emerges the psychedelic bass and guitar tones that permeate this album. Recording these tracks, Parker channels Sgt. Pepper’s era Beatles, making Innerspeaker a sort of intersection between indie rock and the summer of love. The fuzzed out guitar and bass, the spaced-out synths, and the slightly echo-y vocals that are low in the mix soften the indie/garage sensibilities of Parker and give the record an expansive sound.  High points on this record include opener It Wasn’t Meant To Be, a song about a man who desires a woman who is his complete opposite (they have different tastes:  “And she doesn’t like the friends that I make, doesn’t make friends for friendship’s sake. She just gets bored sitting by the lake…”), and rock-out session Runway Houses City Clouds, the spacey, ethereal vocal line winding amongst driving guitar lines. That said, the record has no real low points: Parker chugs along at full speed, filling the album with catchy psychedelia where each song is as good as the last.

The physical product is gorgeous and was worth the wait. The art reflects the psychedelic nature of the music, bright greens and reds of nature in the fall in distorted, repeated images on the front cover, another beautiful shot of the fall leaves on the back, and the reflections on a perfectly calm pond inside the beautiful gatefold cover. The 180 g vinyl sounds amazing, the warmth of the vinyl bringing out the warmth of the music. Comes with a download code for the mp3s if that’s your thing, and in fact, when I ordered from Insound, I got an instant download of the album, which rocks. 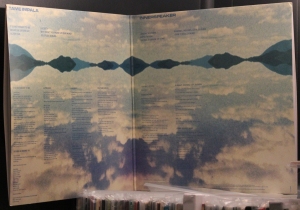 Go out and get this modern psychedelic masterwork. It’s available directly from Modular Recordings, but if ordering from Australia isn’t your best option, you can find it from your favorite vinyl vendor!